Stories
You are here: Home1 / Stories2 / Johana’s Future is Bright 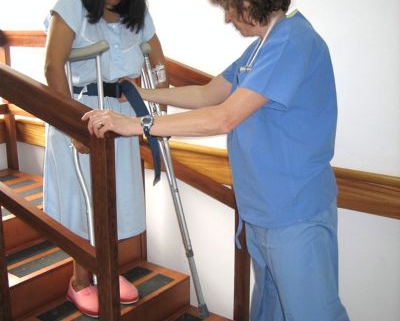 Johana Hidalgo came to CAMTA in 2012 with severe rheumatoid arthritis which had atrophied her left hip. At 21 she still hoped to go to university, get a job, and have a family. But her pain was so great that she was unable to leave home where she lived with her parents and two brothers. A hip replacement would make a real difference in her future.  Although Johana confessed to a certain amount of nervousness about the operation, she had no fear because she knew that the operation would make her better.

Johana made it through surgery with flying colours and took her first steps with help from physiotherapist Judy Black.

Johana’s arthritis has affected so much of her body that using crutches is harder for her than most people. Her triceps are weak and she doesn’t have full use of her hands so she can’t grip very well. Regardless, she never lost her smile and positive attitude, and she won the hearts of the entire CAMTA team. We know her future is bright!

Climbing the Stairway to Recovery