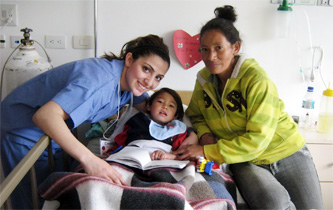 I was a student on a CAMTA mission. I really wanted to do a story on one of the patients and one just jumped out to me. I chose to do my story on a little five and a half year old named Dilan Ariel Catellano Quisaguano. The little guy and his condition hit close to home for me because tiny Dilan has Cerebral Palsy (CP), a condition that my younger brother has, and even more, when my brother was just Dilan’s age, he had a triple tendon release done, which is the same surgery that Dilan had.

I was privileged to have Dr. Jarvis and Dr. Lawton let me actually go into the OR and watch the surgery. Before he was put under general anaesthesia, I held Dilan in my arms while the OR nurses were prepping. He was just so cuddly and soft. After seeing how the surgery was done and knowing that the little guy was going through the same thing that my brother went through, I knew I had to do a story on him.

Dilan can’t talk or walk upright and expresses himself by making subtle sounds and gestures with his hands. Just by looking at him it is evident that he is an extremely bright boy and knows a lot about what is going on around him. He is very small for his age and is about the size of a 2 year old. He lives with his mother, father, and brothers. They live just south of Quito?about 30 minutes away. His mother cannot work due to Dilan’s condition and his father works in construction, helping put up cement walls. With her first child Dilan’s mother had a normal pregnancy but she was unable to deliver her baby naturally and had to have a C-section. When she was pregnant with Dilan, she again had a normal pregnancy but this time went to a different hospital to deliver her baby. The doctors there wouldn’t let her have a C-section even though she needed it, and she was in labour for 24 hours, which resulted in Dilan being asphyxiated. At age three months, his mother noticed Dilan’s hands and legs growing abnormally and that he was not developing like her first child. She took him to local doctors who diagnosed him with CP. After that she tried seeing many doctors, including orthopedic surgeons and neurologists but none of them would help her due to her low income.

She was referred to a social worker who told her about CAMTA and the great work they do here in Quito and she immediately knew she had to come and see if the doctors would be able to help her. She finally saw a sign of hope but still in the back of her mind her worries about being denied just like every other time was haunting her. If she was to be denied care, she planned on going about what she had been doing for years, saving pennies to try and get her son the care he needed, but she knew the chances of that happening where very slim.

Clinic day came and she came in with Dilan, her hopes high. After meeting with the pediatricians, she was told the good news?Dilan was approved. She had to pay $20 for the surgery but that was next to nothing compared to the thousands of dollars the local doctors would have taken from her.

Dilan’s surgery went very well. He was in a bit of pain due to his double full leg casts that covered the eight incisions that had to be made, but he is a tough little guy. He loves to draw and scribble, which went perfectly with the markers and notebook that where included in the gift bags CAMTA prepared for their patients. My interview sheets actually had scribbles all over them due to him sneaking in his tiny arm every now and then.

His mother said that CAMTA is a blessing from God and she is extremely thankful for the help they have provided her son and it could not have been done without them.

An Update on Dilan

The little guy with CP that had surgery with us received a custom made wheelchair, paid for out of the pockets of CAMTA volunteers. This is the note CAMTA received from his mother:

Best wishes, affection and a big hug to the CAMTA team. I will be forever grateful to you for operating on my son, Dilan, and to all the members of CAMTA for helping to get the wheelchair for my son.

Peace, love and blessings from God to you and your families for being so good. You deserve this so much.

I hope that God always guides their ways so that they arrive safely on their missions, because they are angels that God has sent us with the help and care that we need.

I will forever ask God to guide and protect them. I am thankful and happy, because this is the best gift I have received in my life, for my son, who improves and is happy. Many hugs and kisses to all the people who make this possible with their donations and aid that we need so much.

From Quito, Ecuador to Edmonton, Canada – may God bless you today, tomorrow and always from Dilan Castellano and his family. You leave us happy and thankful for everything.

Climbing the Stairway to Recovery
Scroll to top