Stories
You are here: Home1 / Stories2 / One Child with Hope for the Future 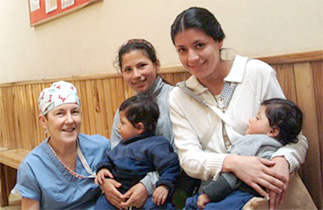 CAMTA’s departure from Edmonton in the wee hours of January 24, 2003, was on an extraordinarily cold night.  The team of 25 included nurses, surgeons, anaesthetists, a family doctor, a physiotherapist, an anaesthetic technician, three lay people (two travel agents and one CAMTA representative).

We traveled from Calgary, through Houston, and arrived in Quito, Ecuador late in the evening, after almost 24 hours en route. Children selling flowers greeted us at the airport.  They scurried around us and under our feet as we loaded the bags onto the truck for transport to the clinic where we would spend the next 10 days.

I was filled with great anticipation of this, my fourth, medical mission.  This team had traveled together to Ecuador on three previous missions, but on those occasions we had traveled to the city of Cuenca in the south of Ecuador.  This time we were entering the unknown – the city of Quito. The city of Quito is the capital of the country and it is located at 9,500 feet above sea level in the volcanoes of central northern Ecuador.  The Tierra Nueva Hospital, our final destination, is located in a poor area in the south end of the city.

On Saturday morning we were oriented to the hospital and had a chance to meet some of the local people with whom we would be working side-by-side over the next 10 days.

On Sunday morning the pre-admission clinic commenced early — there were already 130 people waiting when we arrived at the hospital at 8:00 AM.  We exchanged greetings with both patients and their parents as we entered the hospital.

My eyes caught sight of a young mother with two children about 7 months of age.  She smiled as I passed.  When I returned from the clinic to where she waited with her children in the hallway I noticed that one of the children had bilateral clubfeet. I asked the mother – through my husband as interpreter – about her children.  I learned they were twins and this delighted me because I am a twin. But I was saddened that, while one of the twins was completely healthy, the other, Dustin, had abnormal feet.  I expressed my hope that her child would be able to receive surgery.  Later my heart leapt when I learned that her child was one of our patients.

Clubfoot is a congenital disorder that occurs in about 1 per 1000 births.
It develops early in the pregnancy and results in a downward and inward pointing foot.  The Achilles tendon as well as the tendons on the inward side of the foot are shortened and some bony abnormality also occurs.

On the day of surgery, I hugged the young 19-year-old mother when she arrived, with Dustin, at the operating room.  I was so happy for her.  Her eyes were glistening with anxiety and trepidation about the impending anaesthesia for, and surgery on, her baby.  But her large Ecuadorian eyes also conveyed hope and anticipation.

The surgery went well and after ninety minutes Dustin was in the recovery room with his mother at his side.  The mother was so grateful for the fact that she could see that her son’s feet were straight in his leg casts.  She was given a backpack containing toys and a soccer ball for each boy.  Football (soccer) is very popular in Ecuador and now Dustin would some day be able to compete with his twin brother on an even playing field.

I was unable to see Dustin and his mother before they were discharged from the hospital.  However, my colleague Mark, a physiotherapist, said that the young mother was overwhelmed with gratitude.

The child’s casts would remain on for another six weeks and follow-up care would be provided by a local physician.

It is heart-wrenching to see the many families who are in need of our help and to know that we do not have the time to help all of them.  In Ecuador there are so many children with orthopaedic problems who have no access to the care that we take for granted.  We saw many hopeful faces at the pre-admission clinic – some that were transformed into pictures of delight, following surgery, and others who still wait for the chance to have the surgery that will completely change their life.

Author: Eileen Guilfoyle, RN, is a Registered Nurse, formerly with the University of Alberta Hospital, Edmonton, AB. She is a founding member of CAMTA and has participated in 11 missions since getting involved with the organization in 2001.

Postcript:
Dustin came for revision surgery in 2005. Since then he has been able to play soccer but he still has an outward “flip” of his leg in order to prevent his left foot from striking his right heel when he runs. When he was seen in 2012 the decision was for no further surgery. The benefits did not outweigh the risks.

Dustin and his twin brother are now 10. They and their mother live in a nice apartment on the third floor of a house near the airport in Quito.  Last year Dustin’s mother got thyroid cancer and we brought the family of three to Edmonton, Alberta  for radio-iodine therapy after she received surgery in Quito. She is fine now and is back at work. The boys are in a private school that is 50% bilingual and they have a report card average of about 17 out of 20 so they are honors students. My heart is full of joy as I write about them.